Map- How to find us! 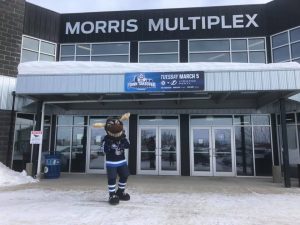 The Morris Multiplex is located at 380 Stampede Grounds in Morris, Manitoba. We are a short 30 minute drive on  Highway 75 South from Winnipeg, Manitoba. We are 35 minutes drive from the United States Border-Pembina.

Morris is situated in the hub of the Red River Valley, at the crossroads of PTH #23 and #75, which connects with numerous Midwestern U.S. interstate highways. The shallow valley spreads for many kilometres to the east and west, but only raises a few metres at most. Repeated flooding in the past has left the valley floor covered in rich river silt. The fine textured black soils are some of the best producing agricultural soils in the world.

PTH #75 runs from Winnipeg through Morris and becomes I-29 in the United States and extends to Mexico. Morris is the only Canadian community on this artery in which PTH #75 serves as the town’s Main Street. Morris is strategically located to capitalize on the emerging north/south trading alliance called the Mid-Continent Trade Corridor, which is one of the fastest growing north/south trade routes between Canada, the U.S. and Mexico. The Canadian National, Canadian Pacific and Burlington Northern Rail lines also serve the community. Canadian trucking firms that are both national and international carriers increasingly use HWY #75. Annual traffic flow is in excess of two million vehicles and, according to projections, is sure to increase.

See what’s on at the Morris Multiplex.